Hey team! I just received my toolkit with the soldering iron and other parts, so was excited to get to work this weekend.

While I was able to get the one panel LED to work in step 006 with the original test code, the cube stopped working when I expanded it to 2 panels (by the instructions, I didn’t know if I was supposed to use strandtest-1.ino as well for the two panel test, and if so, what “The following code is meant to test the IMU. If you do not wish to use the IMU, this code will not work. Instead, modify the strandtest code to test 32 LEDs, rather than just 16” meant. Modify to 32? Does that mean for the final product I need to modify it to 96 (16 x 6 sides?)

When the two panel test didn’t work, I just figured I would have to assemble the full cube and there might be more code later on for me to use. That didn’t end up working

I uploaded strandtest-1.ino as is onto the Uno board connected to the cube, and unfortunately the lights didn’t turn on. Not only that, but I noticed the wires connected to the board started to heat up a great deal, eventually with a little smoke emitting from the bunch. Anyone else had this problem?

I’ve included some images for reference. Any thoughts on how to best troubleshoot this? Like I said, I had the first panel working but it seemed to go down hill from there. Now that the cube is all put together, getting back to just one LED panel is a bit of a headache so was trying not to take the full cube apart if possible. 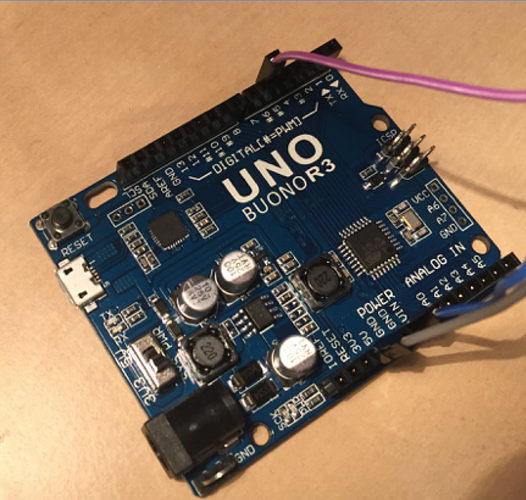 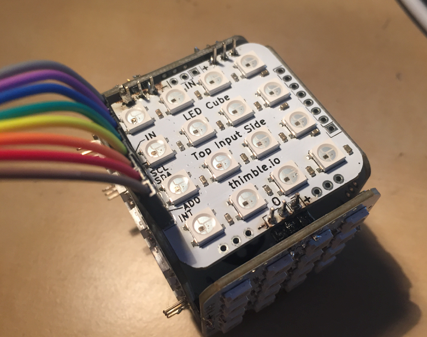 Plus some additional images - happy to upload any other views if they help. 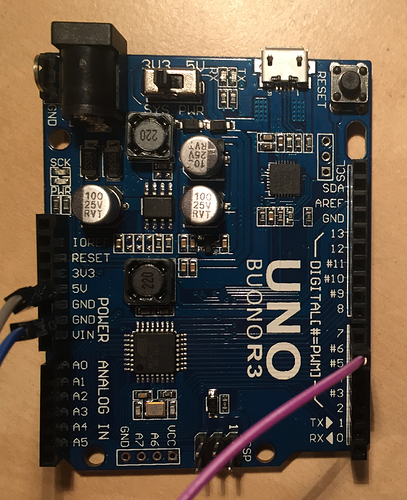 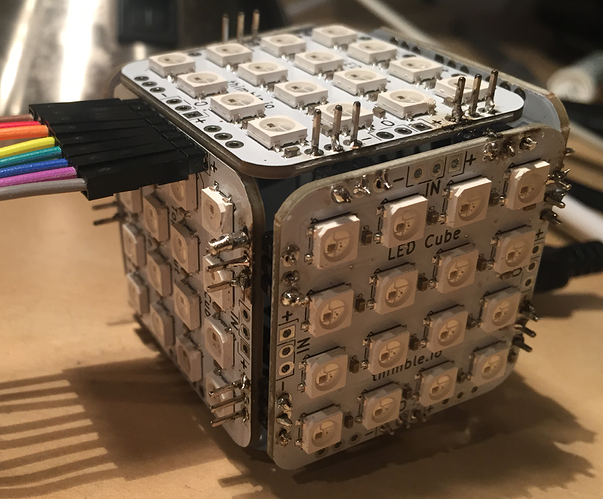 Overheating should be a connection problem, so it should be something with the soldering. Do you have a multimeter to check your connections?

You should check the connections. Every O(UT) pin should be connected to an IN pin, except for the bottom board.

The last picture shows no IN pin connected so something went wrong during the assembly.

Interesting! I guess I thought I had connected the cube correctly – is this more of an assembly issue or an issue with actually soldering the original plates incorrectly you think? I took a picture of each side of the cube as it relates to the assembly diagram.

I’ll see if I can resolder it together… might take a while to undo this bad boy. 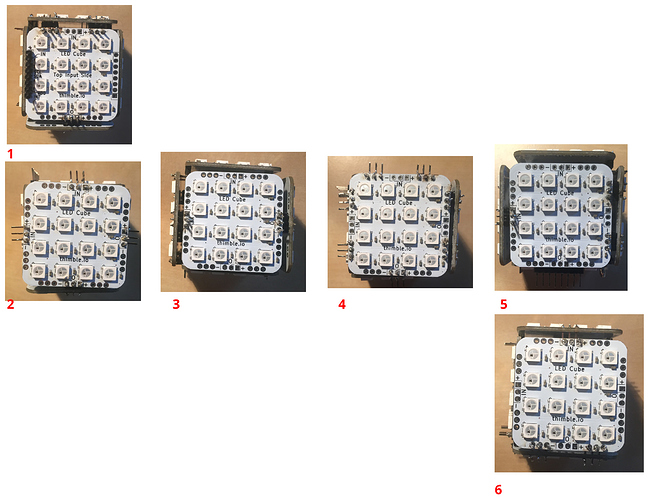 My disclaimer is I haven’t built my cube yet, but comparing your pictures to the ones provided here, it looks like some of the board connections are incorrect. It’s a bit tricky for me to follow without having done the kit myself though. 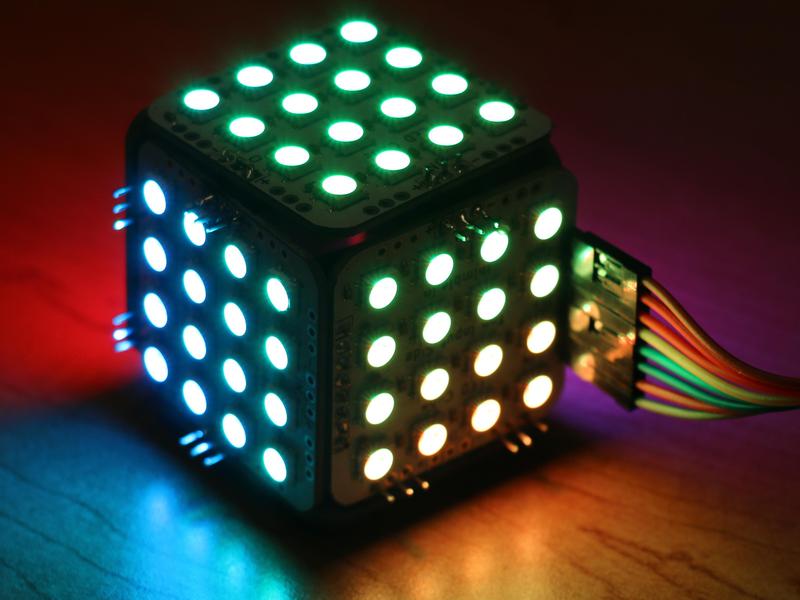 Build your own LED Cube!

Two things I can say from just the pictures, board 2 has two sets of ins and outs! this should not happen. board 3 looks fine. board 4 does not seem right either.
Also you only need to use the test code and each time you add a new board, you add 16 to the number of pixels. So this ends up being 96 in total.

List of soldering points (without IMU).
My apologies for the quality of the drawing.
Hope this helps. 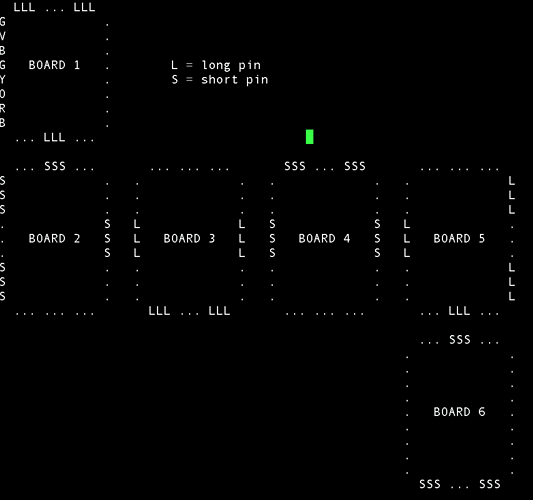 I completely agree with the idea of this being an assembly issue. I would definitely recommend taking the whole thing apart (painstakingly tedious work…) and trying again. Remember that the “in” and “out” solder points only apply to the middle three holes, and not the ones on either side (those are just for joint support).

As far as the programming thing goes, I’m pretty new to that too. As far as I can see, there is only one place that the strand test code needs to be modified as you add panels onto this board. 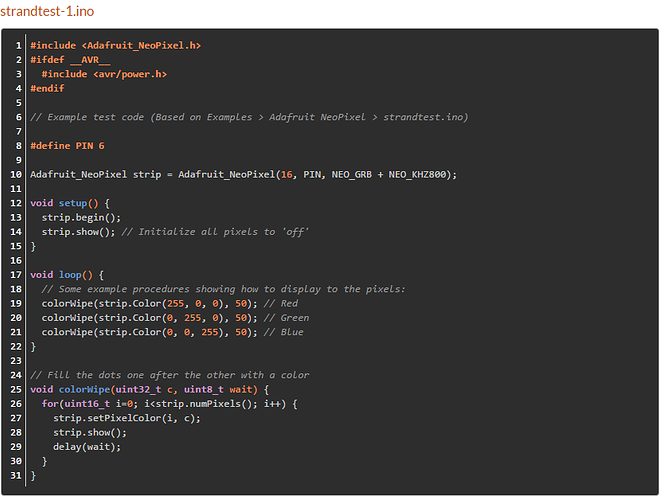 On line 10 change the number 16 to 32 for your second panel, and then go up by 16’s for every subsequent panel. By the time your cube is done it should be at 96.

((If I’m wrong with this, someone please let me know! I still have a lot to learn here too))

Don’t give up! Try again, and post some pics when you’re done!

You’ve got that right. To test each panel the only thing you would need to change is the amount of pixel/leds/lights for the arduino to output to. 16 per panel.

Smoking wires usually means a short in the one of the power lines. Somewhere a positive voltage is connected right to a negative one. Causing a lot of current to passthrough small wires thus creating a lot of heat.

As much as it is a pain it is I would say disassemble the hold thing. Work panel buy panel. If a panel doesn’t work at all let me know and i’ll see if we can get you a replacement.

Hi Guys,
There seems to be a few that are having trouble with getting their boards together in the right order with the connections right so there are no short circuits causing to many amps to flow through the wires, this makes them smoke.
So I have edited this graphic and realigned stuff. If your not quite sure, print this out, cut around the pattern and fold it up into a cube. Your cube should look the same with the same connections. Note: there is only one connection in and one connection out on each board. 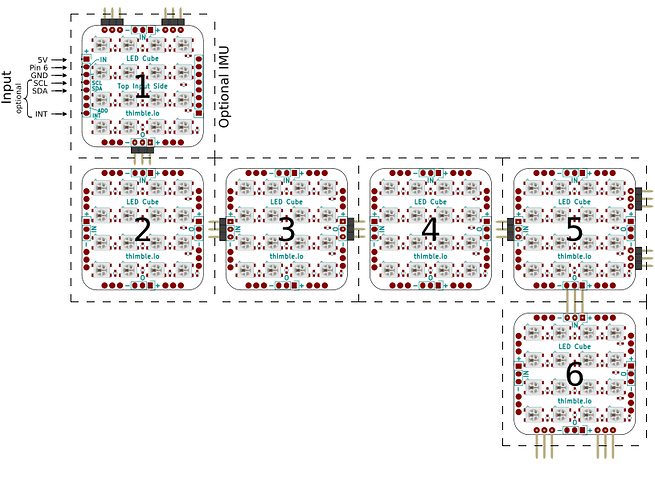