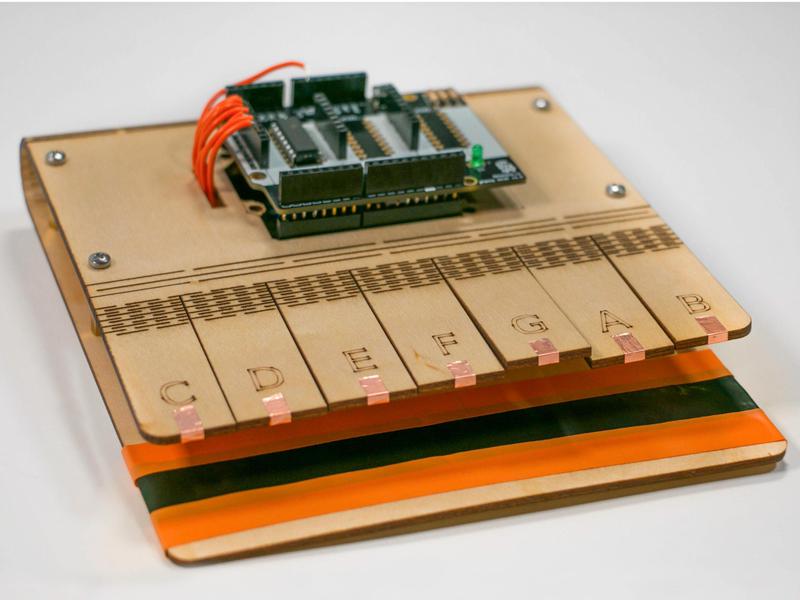 This tutorial will guide you through soldering, assembling, and programming the Arduino MIDI Controller kit. MIDI stands for Musical Instrument Digital Interface, it is a technical standard or protocol used for a variety of electronic musical instruments. The end result of this kit will allow you to play the piano on your computer. In other words, this project will turn the Arduino into a MIDI Controller, which will connect to an open source MIDI software called LMMS. The Arduino MIDI Controller will send the a MIDI Message to the MIDI software which will be interpreted and produce a musical note.

Looking at your shield, there are three central areas of pin outs that are made for the analog multiplexers. Placed between the white silkscreen and labeled MUX0, MUX1, and MUX2. One multiplexer will be used to interface the seven piano keys on the laser-cut wood piece to a single analog pin on the arduino. The remaining two multiplexers and their breakouts are there to expand the kit into any musical instrument you can dream of.

We will be making our piano keys out of Velostat, the black plasticy material that may resemble a thick garbage bag. Velostat is a piezoresistive material, meaning it changes it's resistance under pressure.