This is the Main Project for this kit. We'll be using the WiFi module to create a web server that will allow us to wirelessly control a robot. We'll use HTML and CSS to format and customize your web server and an I2C motor driver to control the motors.

Gather the following parts to complete this project. 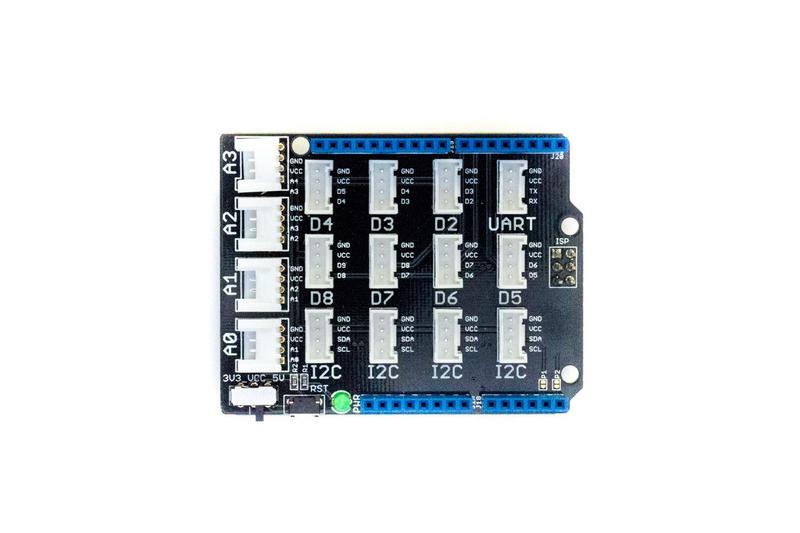 Be sure to follow the instructions below in the order they are given in order to make construction of the robot as easy as possible.

First you'll need two line finder modules, two cables, a piece of paper, and a sharpie or a black marker. 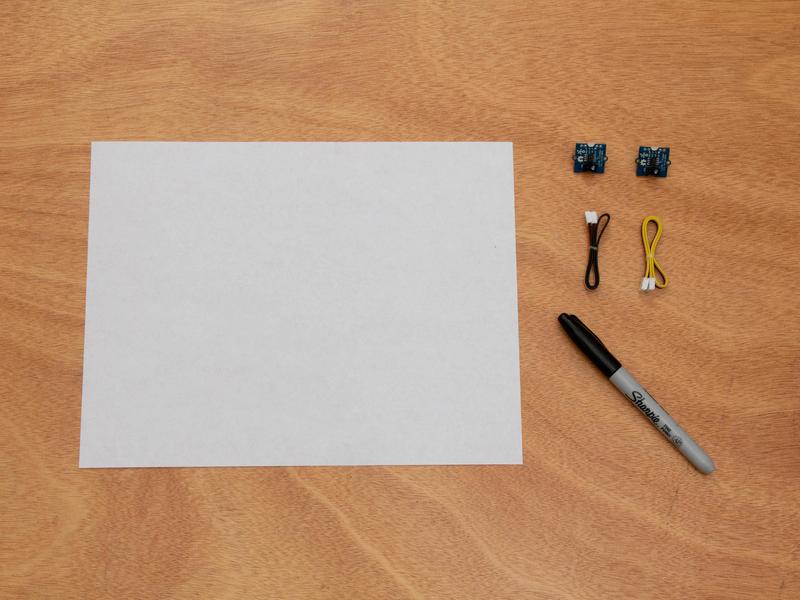 Take one end of one of the cables

Plug into one of the line finders

Repeat for other line finder

Fill in the rectangle

Upload the following code. The example below uses the D3 digital pin.

Open Tools -> Serial Plotter to see the inputs. This will display the value the line finder detects. You'll also notice the red LED on the module lights up when you put your hand in front of the sensor. The goal is to adjust when this LED turns on so that the sensor detects when it is passed from black to white.

Hold the module about eighth an inch from the black rectangle you drew so that both IR LEDs are over the black. Take a small screw driver turn the adjustable resistor clockwise slowly until you see that that red LED turns off. While holding the module half an inch away from the paper move it until both IR LEDs are over white and then turn the adjustable resistor slowly in either direction but just until the LED turns back on.

When the line finder is calibrated correctly the LED will be off when over the black and on over the white. If if didn't work that first time don't be discouraged! This part can be quite tricky. Keep moving the module over the black, turning the resistor until the LED turns off, moving it over the white, slowly turning the resistor just until the LED turns on, and checking the Serial Monitor / the red LED to see if the module is correctly calibrated. 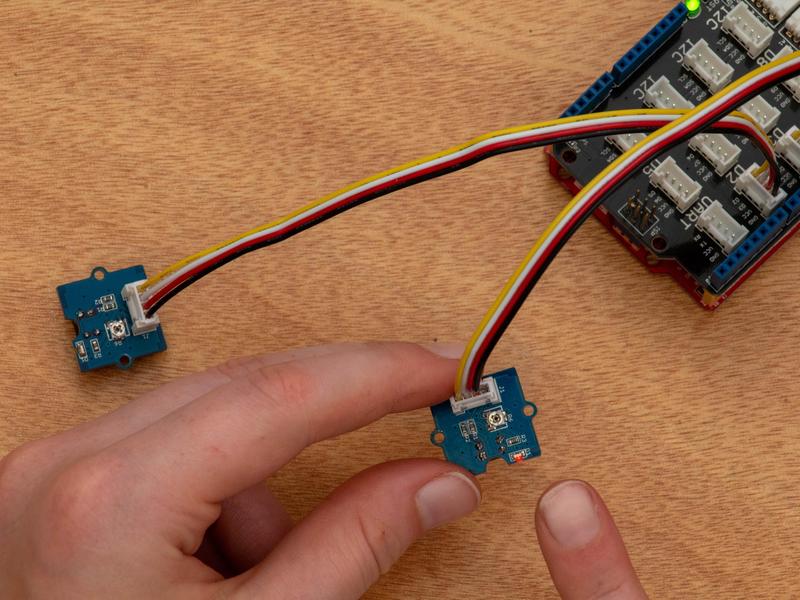 Use screwdriver to turn potentiometer clockwise until LED turns off

Turn potentiometer counterclockwise until red LED comes back on

There is an arrow engraved into the chassis. This shows the top or front of the chassis and kit. Any directions saying left, right, or bottom, will assuming this arrow is pointing ahead. 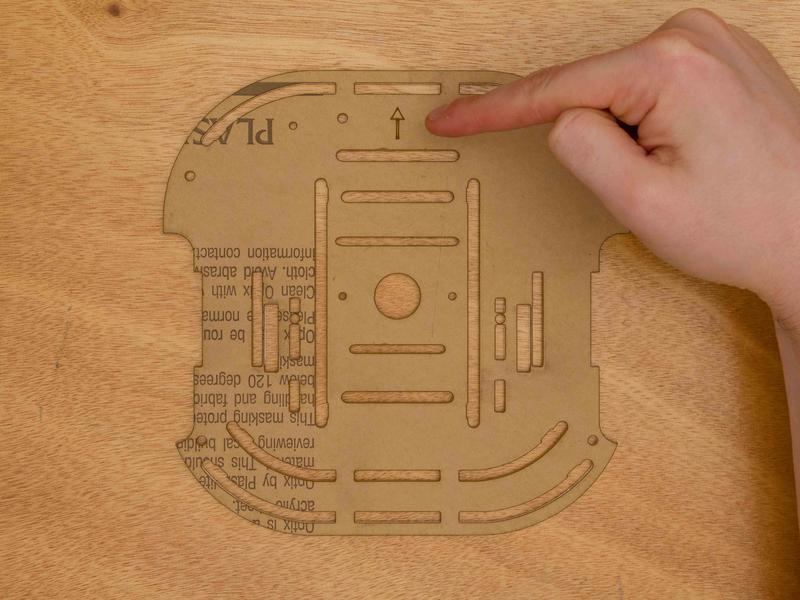 All the acrylic parts in Robotics Kit 1 have a protective film. Before assembling the kit, remove it. 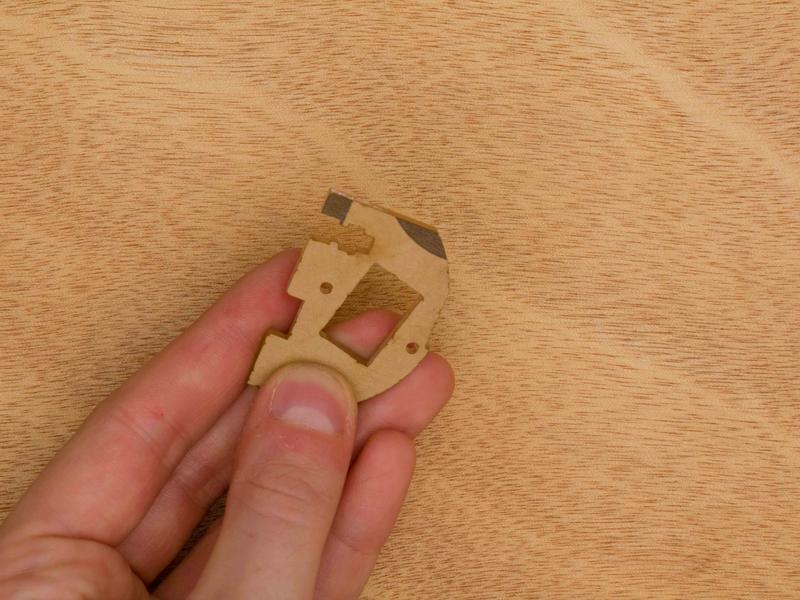 A piece with the film

A piece with the film

Peel off the film

Peel off the film

Now that the line finders are calibrated you can mount them. 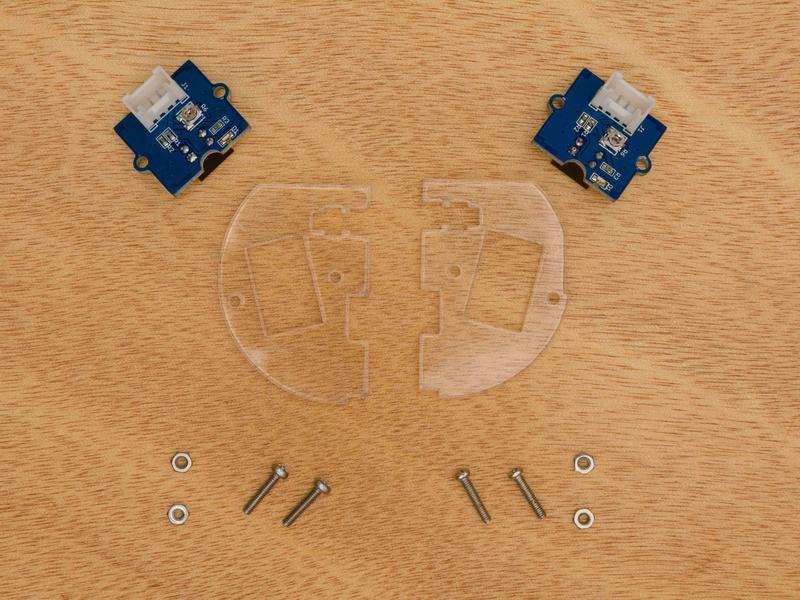 All the parts you need

All the parts you need

Should be over here when mounted

Repeat for other screw and nut

Repeat for other screw and nut

This one is done

Socket should be up here 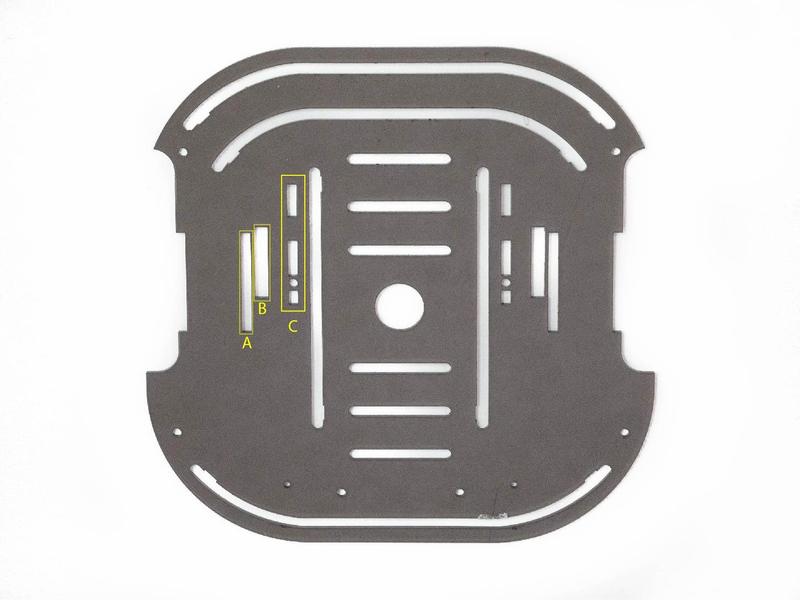 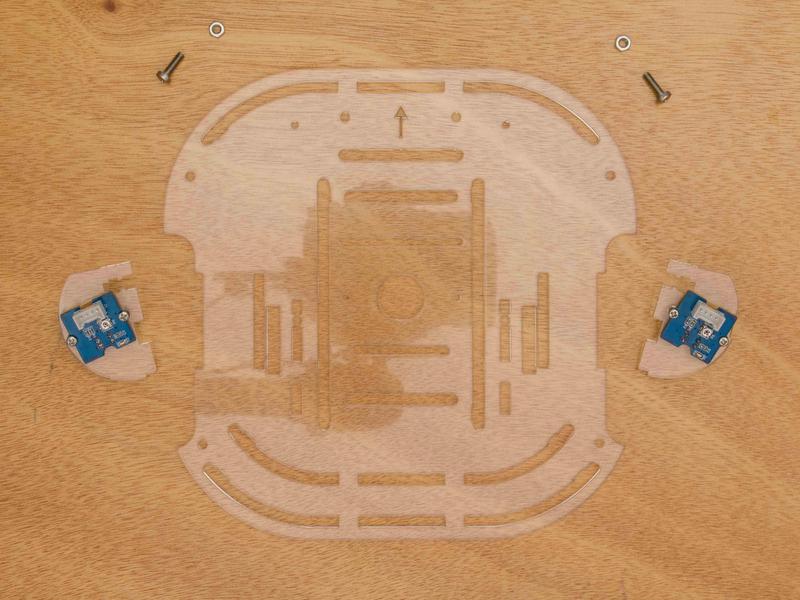 Line up with the slots

It will go in this tiny slot

Flip over and take a screw

Insert from the top through the chassis

Repeat with other module

Both sockets are inward

Mounting the Motors and Encoder Wheel 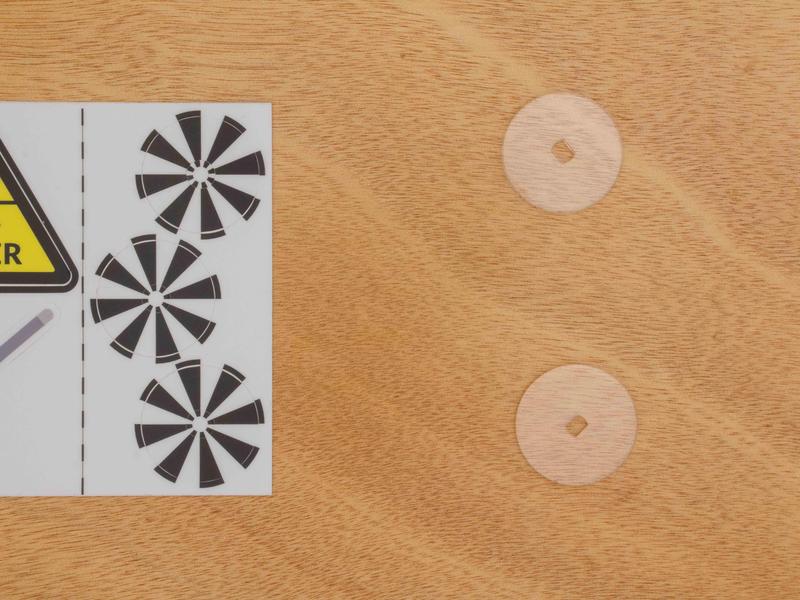 These are the encoder stickers

They go on the wheels

The center cutout is removed

Placed over a wheel

Placed over both wheels

Do not over tighten. There should be no bends in the acrylic parts. 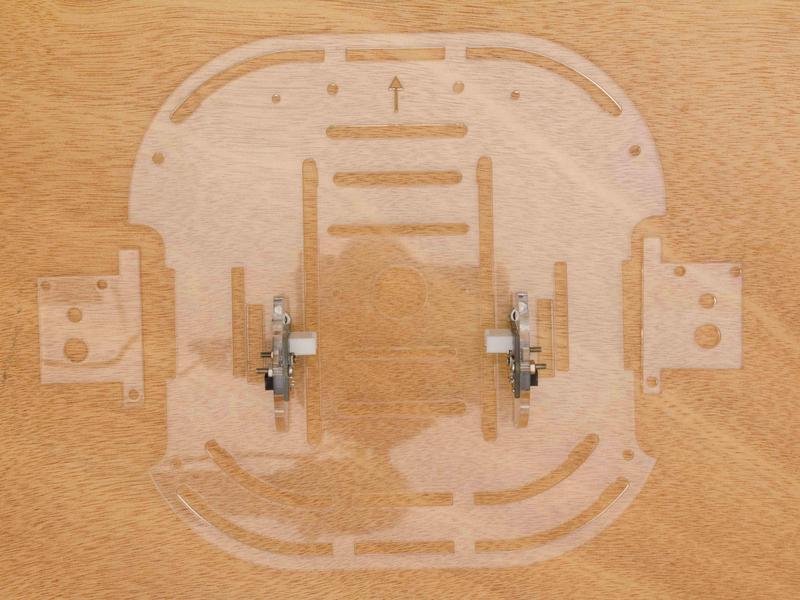 Flipped over chassis and two mounts

Flipped over chassis and two mounts

Will go in this slot

Should be pointed up

Insert from the bottom

This is the motor orientation

The motor holes line up with the mount holes

Adding the other motor

The sticker should face the encoder

Grabbing the other mounts

Match up to motor

Match up to motor

Repeat on other side

So using a hex nut instead is fine

Now flip over the chassis

Now flip over the chassis

Here are the other holes

Here are the other holes

Watch out for the tightness

This is too tight

Repeat for the otherside 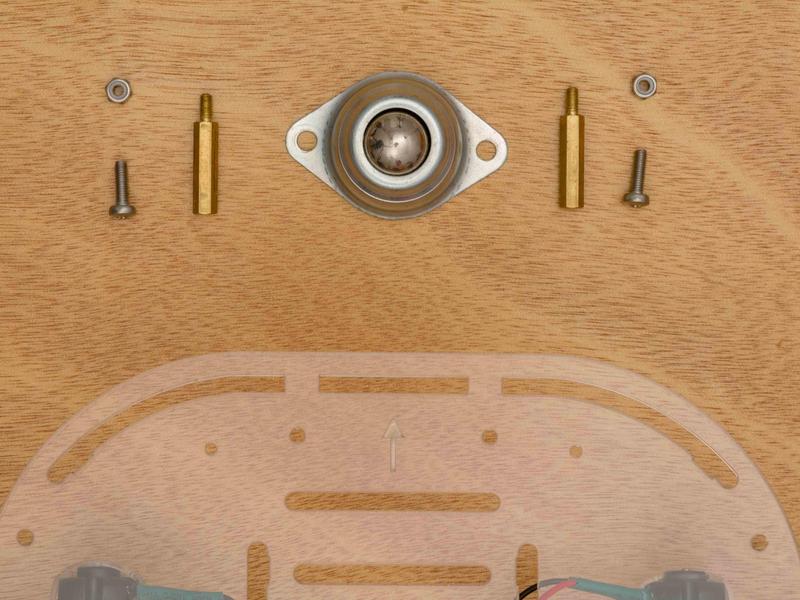 Tighten from under the chassis

Repeat for only side

You need pliers for this. Substitute a hex nut if you don't have 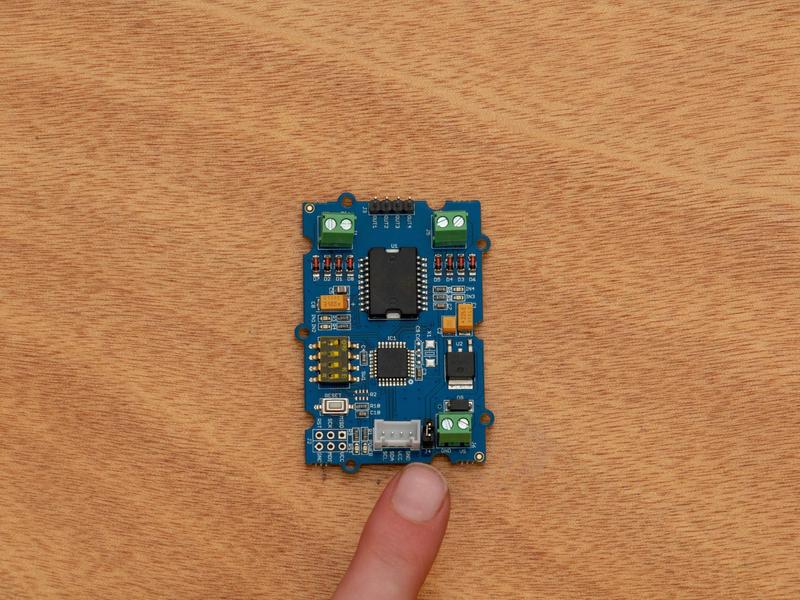 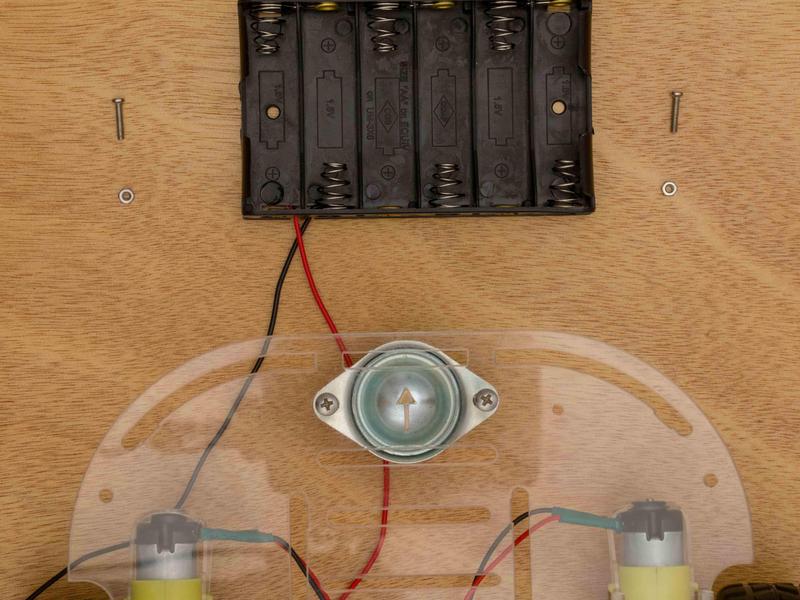 Will line up with these

Line up with chassis holes

Line up with chassis holes

Take the other nut

Grab 2 M2 10 mm screws and two M2 hex nuts. On the I2C Motor Driver there are a total of 3 green screw terminal blocks. The one by the socket is for the battery while the other two are for the motor. 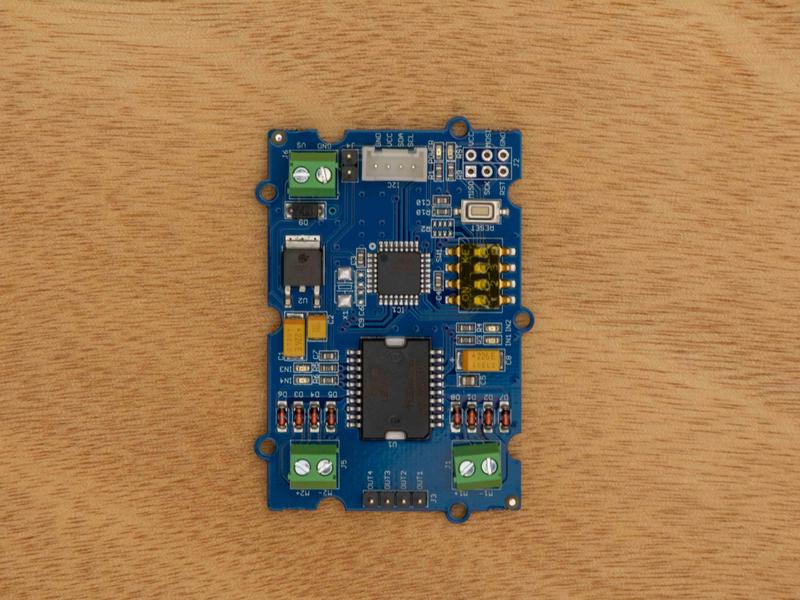 Is towards the front

These are the mounting holes

Add screws into these

Each motor should have a red and black jumper wire coming off of it. 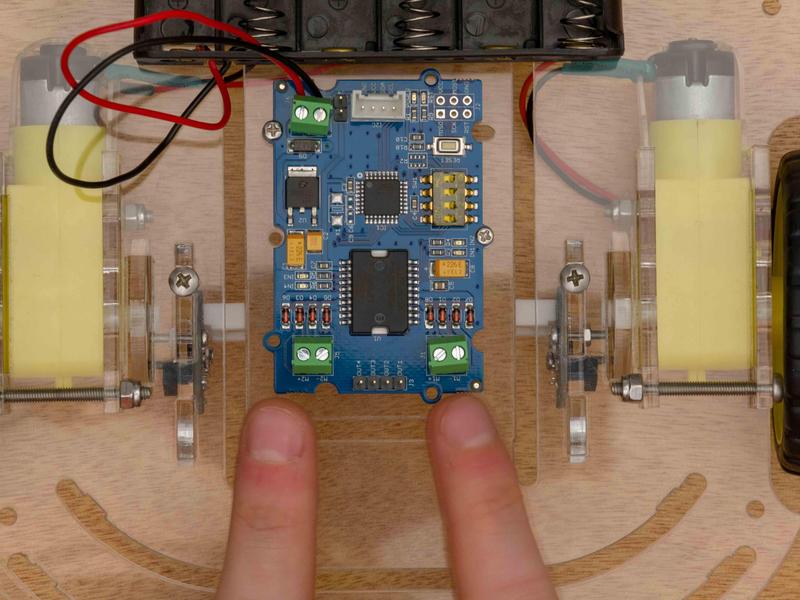 For this part we need the Arduino and the black expansion shield separated. We will also need two M3 10mm screws and two M3 hex nuts. 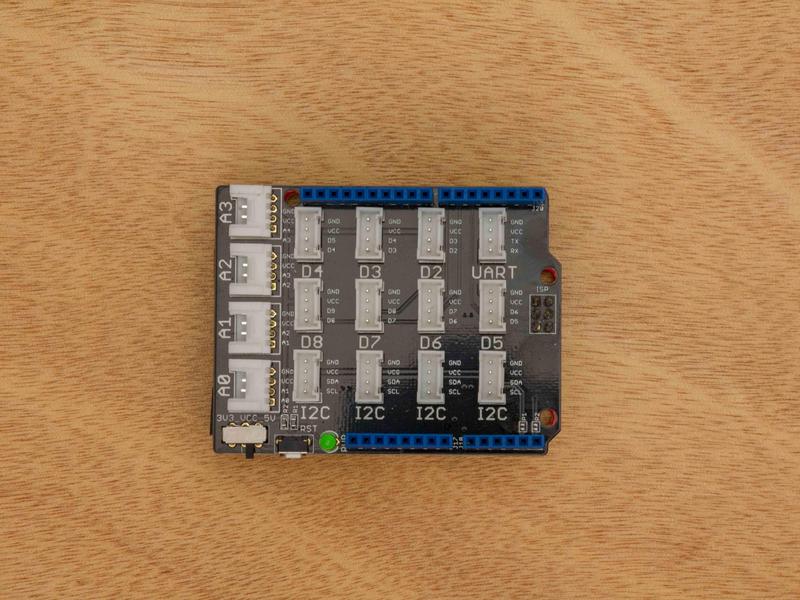 These must be separated

Line up with Arduino headers

We will need 3 standard cables to get the robot up and running. 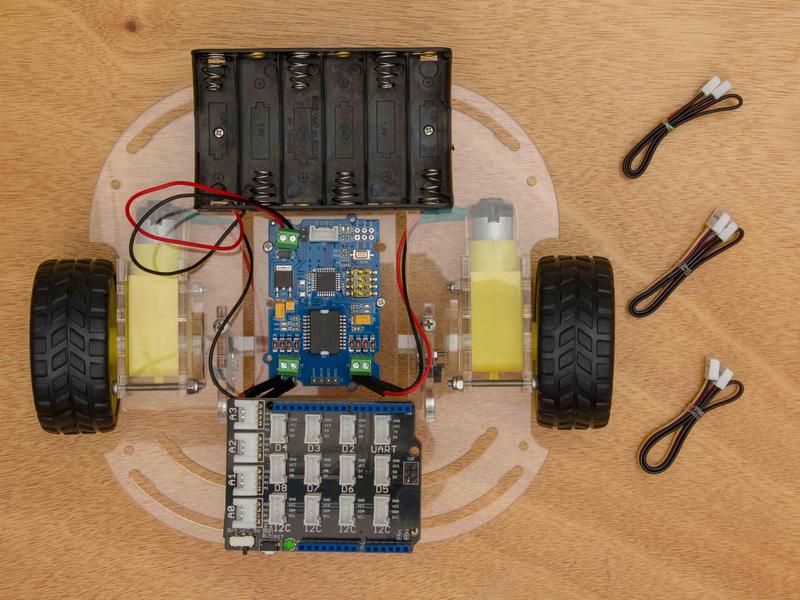 Place one end in the Motor Driver socket

The other into any I2C Socket

One side into a line finder socket

Then feed through the chassis slot to the top side

One side into a line finder socket

Then feed through the chassis slot to the top side

Right side to D3

Right side to D3

Now all the hardware is mounted. It is time to test the motors and learn how to control the WiFi Robot.