This section goes into detail about the design of your kit and provides some more information on how to flash new firmware onto your ESP. This isn't part of the assembly instructions of your kit, but may interesting to read for those of you who want to know more about this kit.

The kit is designed to be noninvasively mounted over top of an existing household light switch and can be installed with only a screw driver. An Arduino will plug into the PCB along the bottom using only the Analog and power header row. This allows for a very small PCB that also functions as the backbone of the mechanical components of the switch. 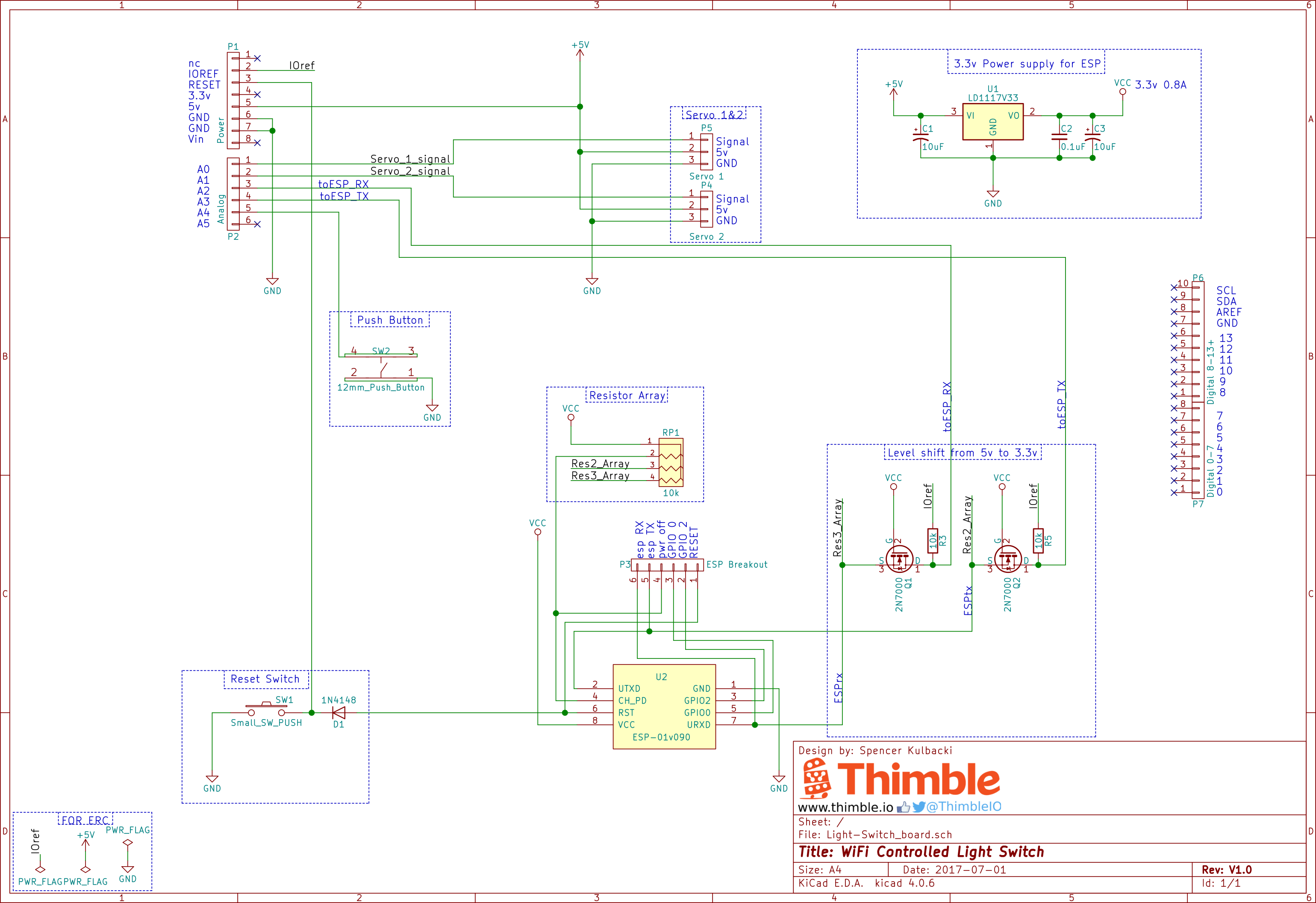 The circuit is fairly simple and uses only five of the Arduino's Analog data pins. Two servos can be are driven from pins A1 and A2 respectively, and the RX/TX lines for the ESP are on pins A2/A3.

The LD1117 is a 3.3v regulator which can supply current up to 800mA. The three capacitors around it are what is recommended by the datasheet and serve to smooth the power input and output to a steady 3.3v. This is referred to as VCC in the schematic whereas the source voltage from the Arduino is labeled as +5v.

The ESP is a 3.3v device and therefore requires 3.3v serial data; the Arduino Uno can only send serial data at 5v. Connecting the two directly would eventually damage the ESP, so two 2N7000 MOSFETS were used. They were chosen because of their fast switching rate and ability to provide 400mA of current. They are the same model as the surface mount (SOT-23) level shifting MOSFETS found on the WiFi Robot kit.

The 10kΩ resistor pack was used manly to show people one example of how combined components can simplify a circuit. In this case one connection to VCC is made and then the three pull up resistors only need one external connection to the circuit.

The Light Switch kit contains holes for soldering in a 6 pin female header to breakout the ESP. This is especially useful for flashing the ESP with new firmware. It also has GPIO 0 and 2 available for use if desired.

The reset button functions as a reset switch for the Arduino and ESP. the 1n138 diode was chosen as a general purpose diode which can protect the ESP reset line from current spikes when pushing the button.

The 12mm push button is used as a fallback toggle button for the light switch state. It can be pushed at any time to toggle the lights if for some reason the ESP stops working. It can also be repurposed to trigger more complex states if the user desires.

The PCB features connections for two servos, this is in the case where someone wishes to use their kit to control a double switch plate. Standard 9g servos were used and mount into the PCB because they are fairly inexpensive but are still powerful enough to toggle switches.

You don't have to do this to use your ESP, it comes flashed with the correct firmware to use with your Light Switch Kit. This file includes the necessary programs, binaries, and instructions in order to flash new firmware to the ESP 8266.

The ESP is "not" 5v tolerant, but many people have been treating it as though it is and have been fine. This is my warning that using a 5v programmer can damage it so be careful!

Selecting Custom Binaries or Updating to a Newer Version

Discussion and Comments for the Further Reading block